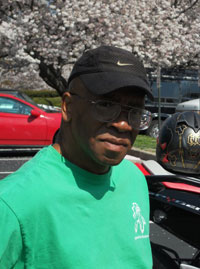 My injury occurred in March 1994. I went for a mountain bike ride on some local trails. At one point I went down a short steep hill, hit some mud, and was thrown over the handlebars. I landed on my head, felt a huge snap, and by the time that I stopped rolling I realized that I had lost all movement and feeling from my upper chest down. I was alone, frightened and it was late in the evening. Fortunately, just before it got dark two riders found me and called the paramedics.

That night at the Trauma Center at Carolinas Medical Center the doctors delivered the grim news, that I had fractured the C6 and 7 vertebra (broken my neck), damaging the spinal cord which caused my paralysis. They operated on me the next day, removing the bone fragments and inserting plates to stabilize everything. Unfortunately, the spinal cord cannot be repaired.  After another week in the hospital I was moved to Carolinas Rehabilitation to begin the long recovery process.

My injury left me with limited voluntary movement. I had fairly good movement of my arms and wrists, but had no finger function and no function below my armpits. At the age of 42 I had gone from being in the best shape of my life to not being able to do anything for myself. I now had to depend on others for everything. Someone had to feed, bathe and dress me, get me in and out of bed; everything. I had to start all over, learning how to do things that were once done without a thought.  A drink of water, writing, using a phone, brushing my teeth, turning a page. Everything had to be relearned.

It took a while but gradually I was able to become more independent. I was in rehab for three months, lived with a sister for six months while going to outpatient therapy, and then another four months of therapy once I returned home. It took me about a year before I was able to live on my own without any daily assistance. My motivation was to be as independent as possible and, thankfully, for the most part I am. Yes, there are lots of things that I’ll never be able to do again, but I have a full and rewarding life. 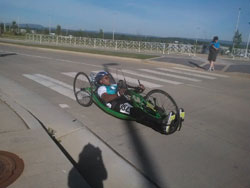 After my recovery I was able to get involved with disabled sports through CR’s Adaptive Sports and Adventures Program (ASAP). Through them I was able to return to cycling through their handcycling program and, in addition to racing, participate in their annual Cycle to the Sea, a three day 180 mile ride from Charlotte to Myrtle Beach. I also play quad rugby and wheelchair tennis.

I met several peer mentors while I was a patient at CMC and CR who had been through what I was facing and they encouraged me through their experiences. That is why I became involved with the Trauma Survivors Network, to encourage the newly injured and let them know that it’s possible to have a full and good life after a traumatic injury.