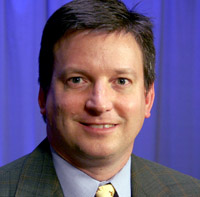 Scott had two semesters left in graduate business school in August 2001, when a car, travelling at high speed, hit him when he was walking in a street. He suffered lung damage, heart damage, a fractured vertebrae, broken vertebral processes, broken ribs, multiple right tibia/fibula fractures with severe muscle and nerve damage, broken right arm broken, broken collarbone and shoulder blades, a spleen damaged so badly it had to be removed, and brain damage from oxygen loss. He was airlifted to Cooper Hospital, a Level I trauma facility in New Jersey, where surgeons placed him in a medically-induced coma that lasted three weeks.

He spent two months in Cooper Hospital on his back in traction, and his orthopedic surgeon gave him a 50-50 chance of either keeping his leg, or having it amputated. He became so weak he could not raise himself to a sitting position, and lost 35 pounds.

He went to Magee Rehabilitation Hospital in Philadelphia, where he spent another two months in a wheelchair recovering from his injuries, regaining strength, and receiving physical and occupational therapy four times a day. Two months later, he was discharged, and lived with his mother to further recuperate.

He had made a miraculous recovery. Within seven months, he moved back to the Washington area, was engaged, returned to work full-time, and was enrolled in the 2002 summer session at business school. He had only missed two semesters.

The experience with the trauma care system deeply moved him, and he realized he was lucky to have exceptional medical and rehabilitative care. He approached the American Trauma Society about how he might best help the organization, and the Trauma Survivor Network was born.