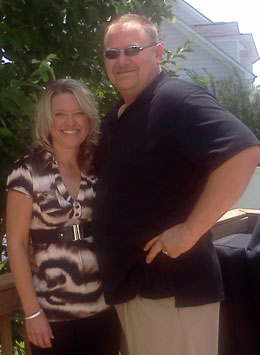 In 2011, my husband and I decided to take a chance and pursue his dream career in dirt racing. We packed up our lives and our two children and moved 700 miles away from home to North Carolina. He was hired as a crew chief for a husband and wife sprint car team. It was what he wanted to do his entire life. We struggled financially in Michigan and saw this as an opportunity to make a better life for our family. There was no question that this was the best thing that had ever happened to us, until September 10th, 2011.

My husband and son had left early that morning for New Jersey to start a week long racing trip. My daughter and I were at home. It was a typical Saturday afternoon for us, cleaning, listening to music, hanging out. I missed the first call. It was a number I didn't recognize. The phone rang again. I answered. On the other end was my son, Matthew, screaming and crying uncontrollably, I could not understand one word. I remember falling to the floor. When I heard the panic and fear in Matt's voice, I knew it was something horrific, really horrific.  But I wasn't sure what happened or who was hurt. I yelled at him to put someone on the phone that I could understand. I will never forget the words, "Angie, I am so sorry but Scott is hurt, Scott is hurt really bad". Time stood still.  I couldn't breathe.  I was distraught to the point where I thought I would pass out.

Within a few hours, my daughter and I were on a plane to New Jersey. I knew it was not good and I knew the people who had witnessed it were sugar coating it, but I really believed that we would cast his legs and be on our way back to Charlotte the next day. When we arrived in Camden, it seemed like days before I talked to a doctor. Hours and hours went by before we knew of Scott's condition. When the trauma surgeon walked into the waiting room, I could tell by the look on his face and the blood on his scrubs that I would not be taking my husband anywhere anytime soon. He regrettably informed me that he had no choice but to take his right leg, a tough decision but one that would save Scott's life. The surgeon went on to tell me that his left leg was questionable and I should pray that he made it through the night. Scott had lost nearly all of his blood, and with little trauma care at the scene, his survival was in God's hands.

We spent 41 days in the Trauma Unit at Cooper Hospital in Camden, New Jersey. Camden is notoriously known as one of the most dangerous cities in America and I understand why. My son and I witnessed countless criminal acts and feared for our safety daily. I also understand why their Trauma Unit is one of the best in the country. We were lucky in the aspect that Scott had some of the best surgeons and doctors caring for him. Frankly, they saved his life.

Scott was flown back to Charlotte, on our wedding anniversary, on a medical flight that would make the toughest flyer weak in the knees. After much confusion and trips to the wrong airports, he arrived at Carolinas Medical Center Trauma Center. He spent five days there and then was transferred to Carolinas Rehabilitation Center. After two weeks of great care and grueling physical therapy, he was ready to come home. The home, however, was not ready for him.

He spent the next six weeks in a hospital bed in our den. I slept in a chair next to his bed with my alarm set every six hours to give him the next round of i.v. antibiotics. We went every Friday to a local hotel so he could shower, which was a task in itself. I had to make sure I had the wheelchair, the sliding board, the shower chair, the sterile bandages, the tape, the plastic bags, the saline, the pain pills, etc.  I had little to no medical background but I had learned how to change wound dressings, wound care, catheterization, i.v. administration, psychotherapy, physical therapy, infectious disease, metal rods, antibiotic rods, external ring fixators, fistulas, medications and the list goes on and on.

His final and 26th surgery was August 26th, 2013. Hundreds of miles traveled, hundreds of doctors appointments, thousands of hours spent recovering from each procedure. Every moment has been worth it to have him still here with us. We have had to make adjustments to our lifestyle but it hasn't stopped us from living. This chapter in our lives has made us stronger, more connected and tougher as a family. It has not been easy by any means. We still have good days and bad days. The opportunity to pay it forward through the Trauma Survivors Network has been the best therapy for all of us. We finally understand that we have been given the opportunity to serve a bigger purpose and to give back to those families who are going through what we went through. This gives us the ability to offer comfort and company to those who might feel alone, like we did.